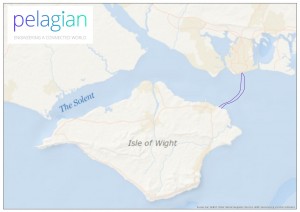 In 2014 Pelagian were contracted to research a desk top cable route study for two new domestic fibre-optic cables between Portsmouth on the UK mainland and Ryde on the Isle of Wight.

The Solent was a challenging area for the study. The routes sympathetically considered the important coastal habitats and also numerous marine activities. These included fishing, commercial shipping, recreational boating and yacht races and the planned Portsmouth regional dredging campaign.

The two cable routes were chosen to minimise the impact of both natural and manmade hazards present in the Solent and provide safe and diversified routes between the UK and the Isle of Wight, protecting internet connectivity for the local population.